You are here: Home / News & Blog / McMillen’s teams put two cars in the show at Bristol 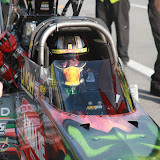 BRISTOL, Tenn. – Terry McMillen put both Amalie/UNOH Top Fuel Dragsters in the show at the Ford NHRA Thunder Valley Nationals and at the same time posted his best qualifying performance of the year (7th) and a new personal best mile per hour (316.45mph) in 1,000ft racing.  His team also made solid runs on the second car driven my car-chief Austin Lambright who qualified 16th in his first NHRA Top Fuel start.

“Over-all is was a pretty good weekend,” McMillen said. “We would certainly have liked a better outcome on Sunday – we’re going to have to do better on Sundays if we plan on staying in this hunt for the Countdown. But, I’m proud of my guys. It’s a lot of work for us to field two cars and they did well. Hopefully our marketing partners will see the additional exposure from this race.”

In the first round of qualifying on Friday McMillen’s team was able to post the third fastest time of the session, gaining an additional Countdown point, his fifth of the season. While McMillen missed an opportunity to gain points on Morgan Lucas (currently 8th) in the first round loss, he was able to keep pace with Shawn Langdon (currently 9th) and maintain his lead over Vandergriff (currently 11th) – both by slim margins. McMillen trails Langdon by just 32 points and leads Vandergriff by a slimmer 12 point margin. 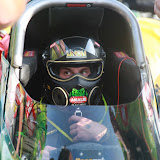 Austin Lambright made his Top Fuel debut at Bristol for McMillen’s racing team. He posted three solid and clean runs to make his first start in his first try, qualifying 16th.  He faced Brandon Bernstein in the first round of eliminations.  Lambright made a solid effort; posting a 4.04 e.t. to Bernstein’s winning 3.88 e.t.

“It was a great experience,” Lambright said. “If we can get some marketing partners interested in that car maybe I’ll get a chance to race again soon.”

Many friends and family were in attendance for Lambright’s debut, including long-time McMillen marketing partner Mark Adelizzi of Flatout Gaskets. “It was great to have Mark at the race,” McMillen said. “He’s been a friend of our team for a long time. So, it was nice to have his support, especially for this race.”