You are here: Home / News & Blog / In The News / McMillen finds consistency in Topeka – still falls short in opening round 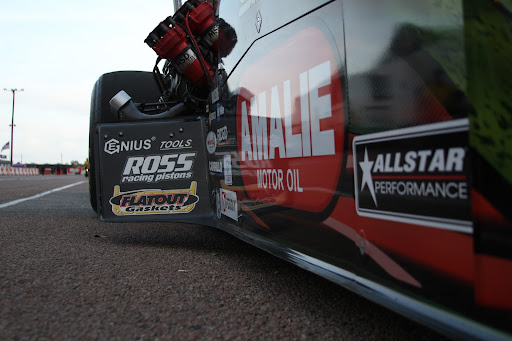 After struggling through the first few races of the season, Terry McMillen and his Amalie Oil/UNOH Top Fuel team have found some much needed consistency to their tune-up. After two solid qualifying passed in the rain shortened Atlanta race, McMillen’s Richard Hartman led team was able to put down three solid qualifying passed in Topeka. The effort landed McMillen 12th for race day in a match-up with Spencer Massey’s, Don Schumacher Racing Top Fuel Dragster.

While McMillen put up a good fight for the first 330 feet, a broken valve would finish his chance for a first round upset and provided a spectacular fireball for fans. No Amalie Pro 70W was deposited on the track.

“Overall it was a good weekend,” a slightly dejected McMillen said on Sunday. “We had a pretty consistent car all weekend and we would have liked to have made  a closer race out of it, but it just didn’t work out that way.”

“I’d also like to commend the NHRA Safety Safari. They  did a good job of getting the track ready after a night of thunderstorms. The lanes were as even as any place that we’ve been all year.”

Destroyed when a valve stuck in opening round action. The blower might also be a casualty, but the team will have to get it back to the shop for further inspection

Number of runs in the 3.80s during qualifying. A very consistent car for McMillen. The fourth pass was a test with new parts

The team seems to have found a new treat for their hotdog roller. Jimmy Dean would be proud of the number of breakfast pancake and sausage “corn dog” type treats they ate this weekend.

– 1 New driver for the Amalie/UNOH team.

Terry and Cori are expecting a bouncing new driver / baby boy on September 17. A succession plan that should keep Terry busy for at least the next 18 years. Baby does need a new pair of shoes… and a Top Fuel Dragster of course.