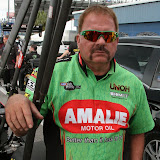 LAS VEGAS  — For Terry McMillen being winless in his first three starts of his third season is not something the Elkhart, Ind. based team had planned. In fact, optimism has been at an all time high for McMillen and his Amalie Oil/UNOH/Motorstate Distributing Top Fuel team. Yet the 0 and 3 start still haunts McMillen.

“It’s certainly frustrating,” McMillen said. “Is is something we can overcome? You bet. But we have to start sooner rather than later. The competition in Top Fuel this year is at a higher level that I think anyone could have guessed. I think we had our best performance of the young season in Gainesville, but we still came up a little short. I know Richard (Hartman) and Lee (Beard) are looking at everything with laser precision. So our optimism remains high.”

McMillen comes into Las Vegas hoping he can find some luck and he’ll be looking in some unconventional places. McMillen and his team will utilize a new feature from Google Plus called Hangouts On Air. While Hangouts is not new to Goolge Plus, the “On Air” feature will soon be available to the public. Hangouts On Air allows an unlimited number of guests to join a McMillen Google Hangout and watch streaming video that will automatically be posted to the team’s YouTube Channel.

“This is something unique and we’re honored that Google is letting us beta test this innovative feature of their social network,” McMillen said. “I’ve always said that the one thing I want to get across to NHRA fans is for them to feel the excitement of a race. Hangouts will give us a chance to showcase everything from a question and answer session to live streaming video from our pits. We’re even thinking about hosting a Hangout during appearances and autograph sessions.”

To Hangout with Terry and his team join Google Plus and add Terry McMillen to your circle.

The second appearance for McMillen will be the NHRA Fanfest on Thursday, March 29 from 6 to 7:30pm at the New York-New York Hotel and Casino outdoors on the Brooklyn Bridge. At least 32 professional drivers are scheduled to attend.